How does a watch keep working at the same pace until the last drop of a battery cell?

Well, this is actually a very interesting question technically. And it gets us to how quartz movements work. I beg the pardon from the more scientifically inclined in you, as I will be simplifying much the process.

As you know, in a traditional (mechanical) watch the energy comes from the main spring barrel that through a set of gears pushes in motion the timekeeping element, that is, the balance wheel, which is set as to oscillate with a fixed number of times per second. And old horologers had determined, the quicker the oscillation is, the more precise the watch is.

This is a purely statistical fact: more oscillations per second tend to reduce the amount of any deviations from the norm. 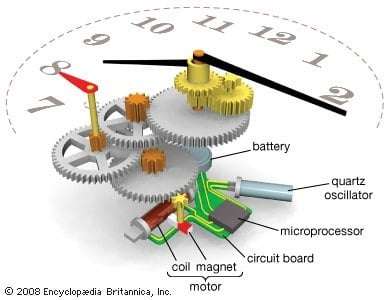 This was the principle that technicians put in practice when they created the quartz watches. Instead of a mechanical oscillation of a wheel, they obtained the oscillation from a quartz crystal. The vibration of a quartz crystal is incidentally faster than a traditional balance wheel, so the watch is much more precise.

Quartz was indeed a discovery. It is one of the most common minerals on Earth. It is made by silicon dioxide, and has very interesting properties.

One of them is that it is piezoelectric. This means that quartz reacts to electrical impulse transmitted through it by vibrating at a precise frequency. So, what happens is that when you transmit energy to a quartz resonator in a watch, it vibrates at an exact frequency of 32,768 times each second (quartz crystals are tailored to resonate at that frequency). These resonations are transmitted back to a simple chip in the watch that makes the seconds hand step forward, one step at a time, when the quartz has vibrated 32,768 times.

In this closeup you see how the inside of a quartz oscillator looks like:

Yes, it looks like a tuning fork, indeed. This is why it vibrates.

The chip counts the number of vibrations and uses them to generate regular electric pulses, one per second. These pulses can either power an LCD display (showing the time numerically) or they drive a small electric motor (a tiny stepping motor, in fact), turning gear wheels that spin the clock’s second, minute, and hour hands.

It sounds an odd number. But it has a practical use.

The frequency of a quartz crystal depends on its shape and size. So each one has it own vibration period: indicatively, the bigger, the slower. Ans, inside the chips that control a quartz watch, we have elements called “T-flipflops” or “ripple counters”.

Each T-flip-flop can halve the frequency of the quartz. So, if we connect 15 of these T-flipflops in series, the output frequency of 32,768 Hertz would be exactly one Hertz. And one Hertz means one oscillation per second.

As per energy consumption of the process, as you can imagine, it is incredibly low. And it has been optimized so to draw as little energy as possible: you know that the typical quartz watch proceeds in impulses, one per second, which propel the small engine it mounts inside of one “notch” for the seconds hand at each burst.

A typical analog quartz wristwatch will run for around two years from a single 1.55V 50mAh watch battery. The total energy in that battery is 78mWh (milliWatt-hour, one one-millionth of a kiloWatt-hour, the unit used to measure household power consumption).

As you can understand from this data, the energy needed to make every step is very small: a watch seconds hand requires 86,400 impulses per day, for a total of 63,072,000 seconds in two years (the typical duration of a watch battery). If you divide the total energy of the battery by this number, you find that every energy impulse draws so little power from an amazingly small power source.

So, the battery proceeds to give its power in short bursts, using very little energy. The microprocessor was designed to work accurately and consistently within certain voltage parameters. Once the batteries voltage drops below a predetermined number, it shuts off and stops working. This is why its power output really stays constant through time, to its last drop. But technically batteries never get used to the last drop. Just to the lowest voltage that the electronic device works on. Now you see how the magic happens, and why the timekeeping is so precise through all the duration of the battery.

This also explains why the typical quartz watch seconds hand proceeds in definite steps, and has not a fluid movement like the seconds hand of a mechanical watch.

Let’s say you want to replicate what happens in a traditional watch – that is, with the seconds hand proceeding fluidly. It is quite easy – no problem: you would just have to make the process happen every – say – 1/5th of a second. This would give the seconds hand the behavior of a typical mechanical watch, with no possibility of distinguishing between the two at a first glance.

But what would be the side effect? The energy consumption is now increased 5-fold. This means that your typical battery would be good for around 5 months instead of 2 years. And until now, no-one has really wanted to implement such a design. Would you?

Other posts by Vivek